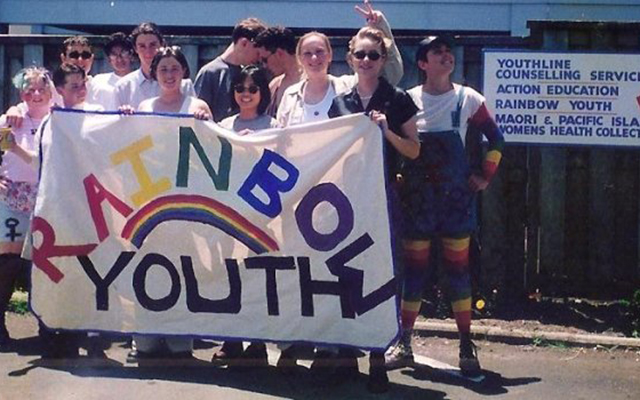 Happy birthday to RainbowYOUTH – this youth-run and youth-led organisation is celebrating the generations of young people who have contributed to its mission of making Aotearoa a place where all rangatahi thrive, regardless of who they love or how they identify.

Here are some of the significant milestones RainbowYOUTH has achieved in the past three decades.

In March 1989, the National Gay and Lesbian Conference is held in Auckland. There, a group of young people discuss forming a mixed-gender youth group, away from typical meet up spots like bars. Two weeks later, Auckland Lesbian and Gay Youth (ALGY for short) held their first meeting.

ALGY team up with Family Planning to deliver sexuality education to various high schools. ALGY receives funding from the Lotteries Grant Board. In 1991, Internal Affairs Minister Graeme Lee announces inquiry into why the Lotteries Grants Board is funding ALGY, saying it is dangerously promoting and encouraging homosexuality to children.

ALGY changes its name to Rainbow Youth and becomes an Incorporated Society. RainbowYOUTH runs it’s group out of the Youthline offices in Grafton and then in Ponsonby.

In 2001, RainbowYOUTH hires its first Executive Director, Merryn Statham. A core group of volunteers run its two support groups and education workshops in schools. Rainbow Youth partners briefly with the Methodist Church to open an emergency house for rainbow youth in Mt Eden, but it does not have the infrastructure to run the house and the project is halted.

Rainbow Youth moves into its own drop-in centre at 281 Karangahape Road. The organisation operates out of this space for the next 10 years.

Rainbow Youth hires its second Executive Director, Tom Hamilton. On Tom’s first day, news presenter (and later politician) Tamati Coffey wins Dancing with the Stars and donates the $250,000 prize money to Rainbow Youth. The organisation uses part of the funding to hold what was then the largest LGBTIQ+ hui ever in New Zealand.

Rainbow Youth rebrands to its current logo and becomes RainbowYOUTH. Duncan Matthews becomes the Executive Director after many years volunteering at the organisation. RainbowYOUTH launches its first two peer-support groups outside of Auckland - one in Tauranga and one in Whangarei.

RainbowYOUTH moves into its current centre at 11 Edinburgh Street, just off K Road.

Frances Arns takes over the role of Executive Director. RainbowYOUTH opens its first regional drop-in centre and hires its first regional staff member - both based in Tauranga. The organisation releases the first LGBTIQ+ awareness advertisement screened on New Zealand television - If It’s Not Gay, It’s Not Gay. The ad goes viral around the world with more than 1.5 million views online.