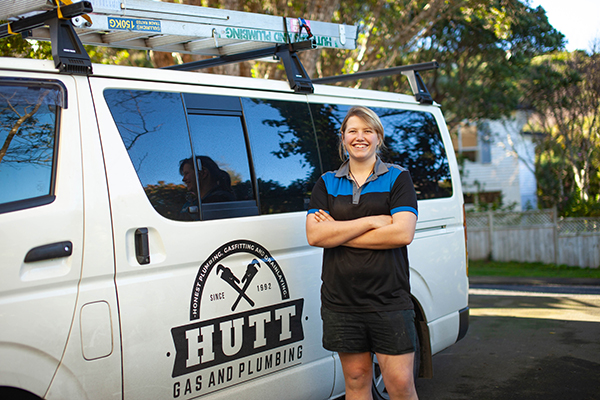 When Hutt Gas and Plumbing Director Colleen Upton was approached by a future female plumber and gasfitter whose request for an apprenticeship had been turned down by 25 businesses, she knew she needed to drive industry change, starting in her own workplace.

Hutt Gas and Plumbing was founded in 1992 and its team of three directors and 24 staff provides plumbing, gasfitting and drainlaying services to residential and commercial customers in the Wellington region. It operates within a male-dominated construction industry currently experiencing an acute skilled labour shortage.

As well as employing Shelley Sydow, who became the company’s first female plumber and gasfitter, Colleen and her fellow directors Darren Smith and Grant Jefferson became outspoken champions for employing more women in their trade.

Most plumbing businesses are small male owner-operated businesses and many do not train apprentices, leaving little opportunity for women to secure roles. In the early days of trying to increase female participation, Colleen was met with flat out refusals.

So she focused on making changes within the Hutt Gas and Plumbing business, getting the team onboard and overcoming obstacles such as sourcing trade clothing that fitted women’s body shapes and ensuring access to suitable toilet facilities on commercial sites.

By employing more female apprentices, then nominating them for awards and increasing their profile at industry events, Hutt Gas and Plumbing has established a reputation within the industry of providing a safe, inclusive and diverse environment. This has created a demand for apprenticeship placements and attracted female staff from other businesses.

It’s put the company in a strong position to lead by example. Hutt Gas and Plumbing’s workforce is 21 per cent female (37.5 per cent if admin staff are included) compared with an industry average of just 2.6 per cent. It employs the highest number of female plumbers of any plumbing company in New Zealand, with five women in that role.

Apprenticeship training has always played a vital role at Hutt Gas and Plumbing. It provides an opportunity to embed the company’s culture and values into its future workforce, as well as leadership opportunities for senior staff.

“When setting up work teams, we ensure all staff get the opportunity to learn from male and female staff. These teams are continually rotated to provide apprentices with a well-rounded experience of different personalities, leadership styles and guidance.” 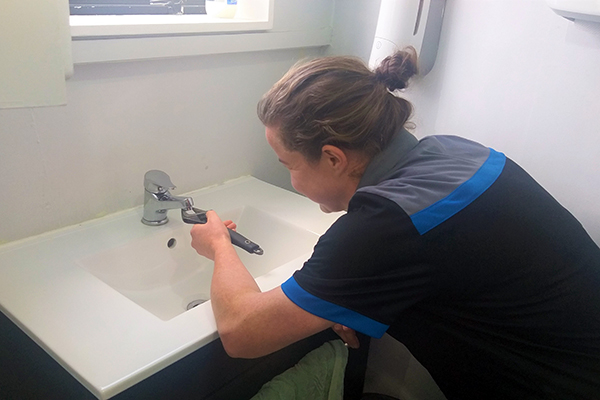 The business has trained more than 50 apprentices and there are more than 14 plumbing businesses in Wellington that are now owned by or employ former Hutt Gas and Plumbing graduates.

The apprenticeship training includes one-on-one pastoral care and mentorship, career advice, budgeting advice and assistance with preparing book work prior to entering tertiary training. The team organises staff study groups for support and encourages staff to join relevant industry organisations such as the National Association of Women in Construction, paying the membership fees.

There is also an expectation that staff will work towards higher qualifications.

Remuneration is based on qualifications and experience, reducing gender-based pay differences.

Colleen continues to advocate for more women in the industry through her influential national governance roles and industry positions.