It’s one thing to dance like no one is watching, but quite another to dance in front of your entire staff knowing they’re watching every single move.

Fortunately, Darren Linton isn’t afraid of putting himself out there, whether it’s on the dance floor celebrating Diwali with colleagues, or making a stand to close the gender pay gap.

Since taking up his current role in 2017, the CEO of Yellow NZ Ltd has led a staff of 200 through a period of significant change as the directory business rebrands as a digital marketing agency. Right from his first day on the job, Darren has made it very clear he’s on the same transformation journey as his staff, and is learning alongside them. 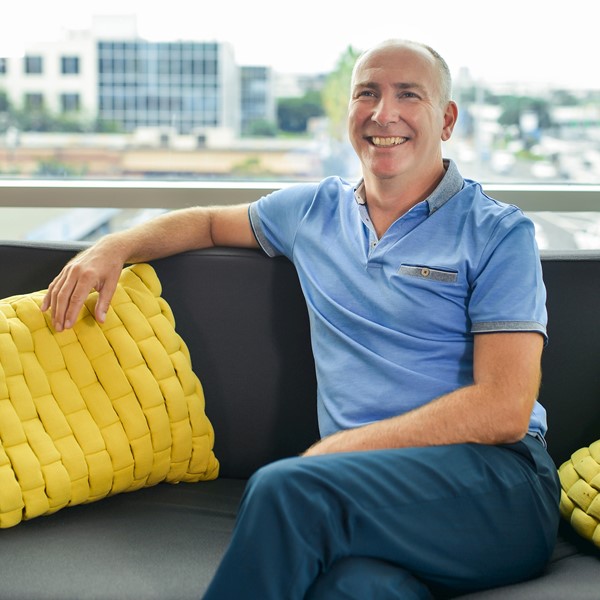 People Experience Partner Jovita Stellmacher says Darren wholeheartedly wants everyone at Yellow, no matter what their background, gender, beliefs, and nationality, to feel safe and have a sense of belonging.

“On an individual level, Darren is open and vulnerable about his journey in this space and stepping in to things that are uncomfortable, which really encompasses the whole diversity and inclusion journey. For example, Darren dressed up and danced at our company Diwali event to celebrate with Yellow’s diverse ethnic communities, and has joined group prayer when some of our staff were going through a difficult time.”

Yellow’s core company values are Do The Right Thing, Build Great Relationships, and Make A Difference. Darren’s leadership embodies all three and Jovita says this resonates strongly with staff.

“The company culture has changed positively as a result of being led by someone who is so genuinely engaged with the people. You can feel the buzz in the office and often hear people talking about it. For example, it’s common to hear things like: ‘It feels different these days, it feels good’; ‘I like the changes happening at Yellow’; ‘They actually listen to us now’; ‘It’s nice to have opportunities to contribute’. This impacts people’s sense of belonging and attitudes at work and this has flow-on effects on engagement and productivity,” says Jovita.

Exemplifying the company values meant acting quickly and decisively when it became clear there was a gender pay gap between the executive leaders. The female Chief Experience Officer was paid significantly less than the male Chief Transformation Officer. Once this was brought to Darren’s attention he took the issue to the board, who supported his push for equal pay, giving the Chief Experience Officer a pay rise and back pay for the period she had been underpaid. A commitment has also been made to ensuring a 50/50 gender split in senior leadership by 2020.

“The message this sends to our people is huge,” says Jovita. “It demonstrates Darren’s genuine commitment to gender equality.”

Darren has further lead a commitment to championing a diverse workplace by undertaking unconscious bias training, and making it available for the entire company. His openness to sharing his own journey reflects his willingness to ‘Build Great Relationships’ and get to know staff members personally.

“Darren lives and breathes this value and encourages us to do the same,” says Jovita. “This pushes people to step out of their comfort zones and get to know each other better, no matter what team or background they come from.

“We constantly get feedback on how approachable and genuine Darren is. Our people are extremely proud to have a CEO who is so real.

“Darren cleared his calendar and got on the first flight to Christchurch following the Christchurch attacks to be with our staff and show support to our customers. The impact this had on our people in Christchurch was significant as it showed he cared.”

Employees are encouraged to keep up to date with changes and developments within the company – and share their thoughts and opinions – via two initiatives Darren introduced shortly after beginning as CEO.

Fortnightly ‘Company Updates’ are hosted at the Auckland office with regions joining via a live stream on Workplace, monitored for comments and questions to ensure regional staff are included. ‘The Fridge’ is a forum on Workplace where people are encouraged to share their ideas on how Yellow could change or improve the way things are done.

Jovita says in a time when CEOs are often so consumed with the financial side of their role that there’s little time for people contact, Darren leads with a passion for both.

“Darren leads Yellow beautifully, showing vulnerability, passion, and drive, genuinely wanting the best for our people as well as the company as a whole. Darren recognises that the financial success of the business will happen quite naturally if people working for the business feel valued and respected, and are therefore able to perform to their full potential.”