As one of the largest Government departments in New Zealand, and one which engages with and represents people from a wide range of backgrounds, the Department of Corrections Ara Poutama Aotearoa needs to have an organisational commitment to cultural understanding.

In particular, Corrections noticed a need for greater understanding of issues relating to LGBTTQI+ communities.

In July 2017, Senior Organisational Development Advisor Theresa Peters’ proposal outlining the need for Rainbow Diversity Training was accepted by the Northern Region Operational Director. A training programme was developed and delivered to staff across prison and community sites in the region, drawing upon international studies and New Zealand statistics to ensure the programme was experiential, inspiring and practical. This training was peer reviewed by international and New Zealand sexual health facilitators, people who worked in the area of gender and identity, as well as internally by Corrections. 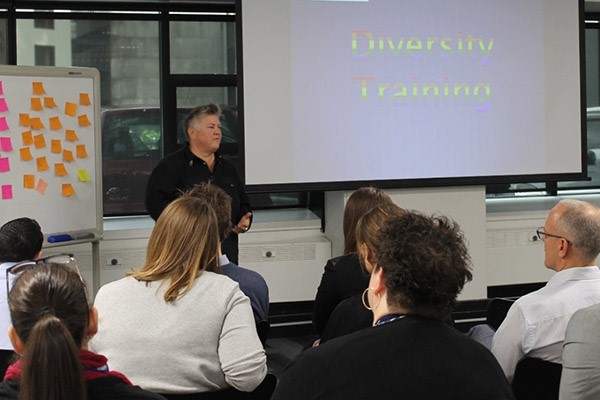 This training was delivered as a pilot to the Northern Region Leadership Team, which ensured the leadership’s support prior to it being presented to frontline staff. It was then rolled out from September 2017, and to date more than 80 sessions of this training have been delivered within Corrections, involving more than 1,500 staff. Theresa has also facilitated this training with staff from the Department of Conservation and Youth Engagement Officers from the Police.

The training has now been approved to be rolled out nationwide, and internally, Peters and Carl Thompson, who also facilitated trainings, were awarded the Corrections Making a Difference Gold award in August 2018.

Since the LGBTTQI+ training has been rolled out, Corrections has also launched its Inclusion and Diversity Council, which has 17 members from across the organisation. The Council has only been in place since September last year, but has already begun to develop strategies to integrate inclusion and diversity practices within the department, and Corrections is currently undertaking workplace consultation on a draft inclusion and diversity strategy.

Feedback on the Rainbow Diversity Training programme has been overwhelmingly positive. Participants say it has given them a better understanding of and sympathy for members of the LGBTTQI+ community, and many say it has improved their relationships with their colleagues, people in their care, and members of their whanau.

There have also been noted improvements in how transgender people in the care of Corrections report being treated, as frontline employees are growing their understanding and work to ensure that they are treated with dignity and respect.

In an anonymous survey following the training, many employees explained their positive and new experiences:

“Looking at my own biases will assist me to be more mindful of the way in which I work.”

“I’m thankful to have received the training to not only better my professionalism at work but to reshape my own ideals and understanding of diverse people in general.”