That’s the spirit behind Te Reo Talk, an employee-led initiative that encourages the use of te reo Māori within IAG New Zealand, an insurance company with approximately 3600 employees around the country.

The initiative is the brainchild of IAG’s Māori Employee Network Resource Group (ENRG), which wanted to encourage the use of te reo in a fun and interactive way, making it accessible to everyone. 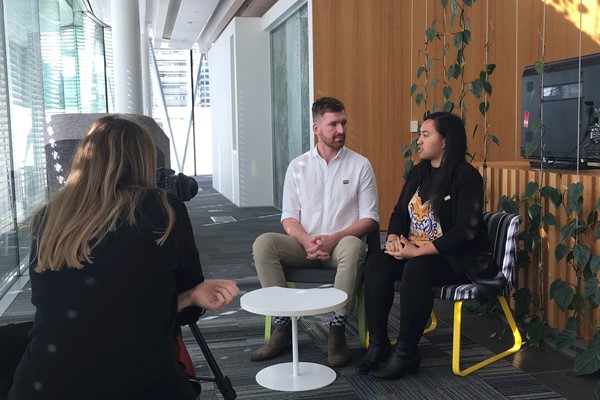 The idea of a video series was brought up at an ENRG hui in 2017 and the first Te Reo Talk was launched shortly afterwards. The video clips are filmed by staff members in the IAG offices and shared on the company’s internal social network. Over two years, more than 26 videos have been created and they are typically viewed more than 550 times.

Executive Manager Culture and Business Solutions Fiona Hewitt says people from all levels of the business have participated in the initiative, which reflects IAG’s commitment to fostering a diverse and inclusive culture.

“Te Reo Talk presents an opportunity for every single staff member at IAG, regardless of their geographical location, to experience te reo Māori in a way that is comfortable for them. For some people, that might mean listening to a Te Reo Talk video privately through their headphones, for others the videos give them confidence to try out Māori words around the office. For others still, Te Reo Talk gives them permission and confidence to include a Māori greeting or sign-off in their email correspondence,” she says.

“One of the biggest barriers to non-Māori using te reo is a fear of getting pronunciation wrong or causing offense. Te Reo Talk breaks that barrier down by presenting te reo in a light-hearted and fun way, and by showing that it’s about giving it a go. Kōrero Māori can be easy and the best way to get to a place where you’re comfortable using te reo is by saying the words out loud and practicing using them.”

The initiative has been supported by senior leadership, and leaders across all levels and business divisions of IAG have participated in videos.

Employees report that the initiative has given them a new confidence in the workplace. Lavinia Taylor says she noticed a real shift in the company a few months after the Te Reo Talk initiative launched, both in terms of the company’s approach to diversity generally, and to tikanga Māori and te reo in particular.

“As a Māori mum, Te Reo Talk helped me feel like I could really be myself. It also gave me the confidence to deliver the official powhiri to welcome Peter Harmer [IAG’s Group CEO] when he came to New Zealand in June 2018. I could see that there was genuine willingness [by the company] to embrace welcoming someone with Māori language.”

The judging panel said that by taking an educational approach and creating a strong impetus to normalise the use of te reo Māori throughout the organisation, IAG New Zealand has embodied its values. The staff is very proud of what they have achieved and have made a significant change to the culture of organisation.